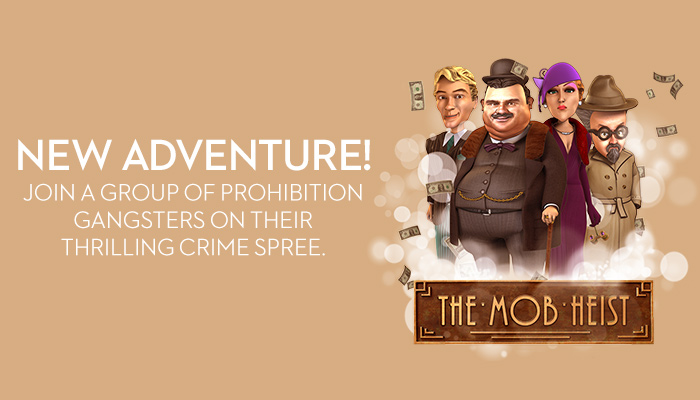 Mobsters reign supreme in the newest addition to our slot roster, The Mob Heist. Spin your way around conniving criminals and corrupt cops as you try to make enough loot to escape the shady streets of Chicago in the 1930s. One way to make a quick buck is to team up with the five gangsters of the game. They’re getting ready to rob five major banks and require your assistance. Trigger the game’s bonus round and you can join them on their quest to get rich quick.

Landing two or more scatter symbols will get you to part I of the bonus round. Your mission is to pile enough dynamite around the door of the vault to blow it open. Once accomplished, your reward awaits you in the form of gold coins. But don’t sit there basking in the glory for too long; you must choose to move on to the next bank, or call it quits while you’re ahead. There’s a total of five banks in the bonus rounds, and you can win up to 1,000X your bet by robbing them.

Another way to get free money in this game is through the free spins mode. Each of the five gangsters included in the heist is a stacked scatter, meaning they each take up an entire reel when they land properly. When all five land at once and take up all the reels, you get up to 15 free spins. You can gather a lot of loot through 15 free spins.

The icons spinning through the reels of the game include cognac, a straight edge shaving razor that you’d see in a barber salon, a pistol, handcuffs, and a cop. All icons, other than the cop, are standard icons that award payouts when you land three or more on a payline. The cop, however, is a wild. It takes the form of any icon, other than the scatters, in order to complete winning lines. If you had two bottles of cognac on a line, starting on the leftmost reel, and then a cop on the same line on the third reel, you’d get the payout for landing three cognac icons.

The Mob Heist slot game pays homage to the Al Capone era that made Chicago a mobster’s paradise in the 1930s. You may see some intimidating characters in the lineup, but remember, they’re on your side. See if you can make quick cash by teaming up with the mob’s most ambitious members.